This winter, Orica-Scott rider Annemiek van Vleuten did something unusual. In search of sun and fun, she travelled to Australia and New Zealand with her mountainbike, leaving her road bikes, the tumultuous 2016 season and the rainy weather behind in The Netherlands. It proved do her a world of good. She kicked off the 2017 season with success, winning the Cadel Evans Great Ocean Road Race in January and finishing third in the European opener, Omloop het Nieuwsblad.

Her consistent performance throughout the Spring Classics earned her the Women’s WorldTour leader’s jersey after Liège-Bastogne-Liège in April, but when her team didn’t travel to the United States for the Amgen women’s Tour of California, she had to hand it off to compatriot Anna van er Breggen (Boels-Dolmans).

Nearly one year since her Rio crash, Van Vleuten is perfectly at home in the Australian Orica-Scott squad and in better shape than ever before. We caught up with the Dutch rider on the Aussie team while she was at altitude camp on Tenerife, preparing for the second part of the season. 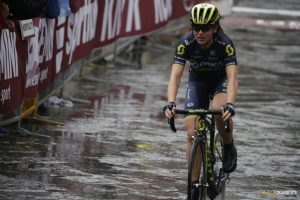 Happy to be part of the Spring action
By spending her winter in New Zealand and Australia, mostly on the mountainbike, Van Vleuten learned to let go, letting of a training schedule and focusing on having fun first and foremost. “It wasn’t scary letting go of training schedules,” she said. “But since I was enjoying myself so much, I just knew that I was doing well. I obviously did put in my hours, but it was just less strict than my training had been in previous years.” Looking back on the results during her spring campaign, Van Vleuten is content. “I am happy and I enjoyed it. I was part of the action right until the final in all races.”

Her consistency was remarkable. In the first eight Women’s WorldTour races, Van Vleuten finished outside the top 10 only once, in Gent-Wevelgem, where she finished 14th. Highlighting the spring was a third place at Omloop het Nieuwsblad in and in the Amstel Gold Race. The latter she had to share with Kasia Niewiadoma (WM3 Pro Cycling). In an unprecedented event, the two riders finished with the exact same time and were both awarded third place.

In the prestigious Tour of Flanders, Van Vleuten came close to the podium. She spent the last third of the race in what looked like the winning four rider breakaway. But when Van der Breggen decided to no longer take her turns at the front, the quartet was pulled back in the final two hunderd metres of the race. The bunch sprint went in Team Sunweb’s favour, with Coryn Rivera taking the win. 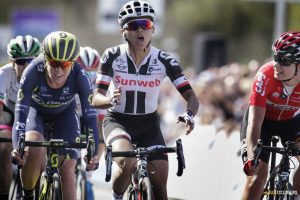 Van Vleuten’s breakaway companions Niewiadoma and Elisa Longo Borghini (Wiggle-High5) were fuming after the race, but Van Vleuten could rationalize the situation. “That’s cycling,” Van Vleuten said. “We all have race radios. I’m sure Anna would have taken her turns if she wasn’t ordered by the team car not to. “I’ve learned that you shouldn’t worry about what you can’t control. You can be mad with Anna that she’s not taking her turns, you can also say – ‘Anna’s out, how can I still win this race?’.”

Of course, there’s an added reason why Van Vleuten wasn’t too concerned with her fourth place finish in the 2017 Tour of Flanders. “Gracie got second,” she said full of pride. “Her second place felt like a victory to me, and to the team.” 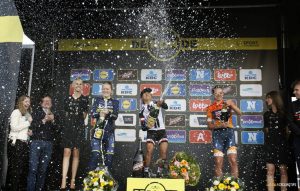 “There are a couple of girls within the team that have always been in the shadow of the team leaders,” Van Vleuten continued. “You’re now seeing that they’re stepping out of the shadows and that’s a great thing to witness. Her second place was therefore something we were all very much elated about. We weren’t sad we hadn’t won.”

The only foreign rider on an all-Aussie squad
Van Vleuten is one of those team leaders herself, as well as the only foreign rider on the 2017 roster. “It took me some time to get used to the team when I joined it in 2016,” Van Vleuten said. “I came from a team with mostly Dutch riders [Rabobank-Liv], and a team with mixed nationalities after that at Cervélo-Bigla. So I was quite aware for some time of the fact that I was different from my teammates.” 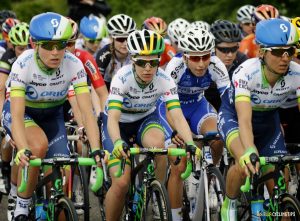 “After a while, I figured it was a good thing that I was different,” Van Vleuten said. “It’s why they wanted me on the team in the first place. Not just as a foreign rider, but as a foreign person, bringing another culture to the Australian team. I’m of added value. Then again, the Australians and Dutchies aren’t that different from each other. Especially in combination with how I’m living my life. I’m professional and serious in what I do, but I also enjoy life.”

Crossing her t’s and dotting the i’s for the summer ahead
At the moment, Van Vleuten is enjoying life at Tenerife, where she has organised an altitude camp for herself, choosing to skip the criterium of Lekkerkerk in the Netherlands and the much celebrated OVE Energy Women’s Tour, in preparation for the summer. “I believe that three weeks is about the minimum you need to go on altitude camp to profit from it. I am bummed to miss the Women’s Tour, because I love that race, but you have to make decisions.”

The mini-break also allows her some alone time. “It’s quite relaxed this way. I don’t have to adjust to anyone else. I’m constantly spending time with other people the rest of the year, which can be quite intense. So I’m enjoying this thoroughly, dotting the i’s and preparing myself for the second half of the season. Just so that I can step it up that little bit.”

Van Vleuten’s next big goals are the national time trial and road championships, followed by the Giro Rosa. Van Vleuten will return to Italy after the team was absent in 2016, due to the preparation for the Summer Olympics in Rio. But Van Vleuten is happy to be back. “I quite missed the Giro last year,” Van Vleuten stated. “I have a bit of a love-hate relationship with the Giro Rosa, as the stages are usually for real sprinters or real climbers.” 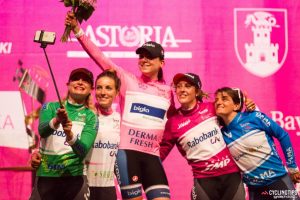 Van Vleuten’s qualities meanwhile lie in time trialling and power climbs, which has earned her a short stint in the pink leader’s jersey twice before, after winning the prologue in 2014 and 2015. Whereas in previous years, Van Vleuten had to hand off the coveted Maglia Rosa to a new leader once the roads went up, in Rio last year, she showed tremendous improvements in climbs. In fact, on the gruelling Vista Chinesa, she outclimbed everyone – including two-time Giro Rosa winner Mara Abbott. She was well on her way to an Olympic medal before her unfortunate and scary crash.

“I’m really eager to do well,” Van Vleuten said. “I’ve recharged my batteries and I’m extremely looking forward to both nationals and the Giro Rosa. I will be fierce and hope to do even better than what you’re used of me.”

This interview was published on the Ella Cycling Tips website: https://cyclingtips.com/2017/06/annemiek-van-vleuten-eager-and-ready-for-her-return-to-the-giro-rosa/